A Brief History of Microsoft

Microsoft has been a central figure in the computer revolution. However like IBM, HP, and Dell a place in computer history does not mean relevance today.

On August 12, 1981, after negotiations with Digital Research failed, IBM awarded a contract to Microsoft to provide a version of the CP/M operating system, which was set to be used in the IBM PC. For this deal, Microsoft purchased a CP/M clone called 86-DOS from Tim Paterson of Seattle Computer Products for less than US$100,000, which IBM renamed to IBM PC DOS. Microsoft did not have an operating system when they closed the deal with IBM and IBM had not done their homework. Due to potential copyright infringement problems with CP/M, IBM marketed both CP/M and PC DOS for US$240 and US$40, respectively, with PC DOS eventually becoming the standard because of its lower price.

MS-DOS became the de facto operating system for IBM PCs and PC clones. At the time PCs were business tools largely being bought in the enterprise, who continued to purchase the majority of PCs during the nineteen eighties and nineties. A brief quote from the Benedict Evans article: Apple, open and learning from history:

In the 1990s, the PC market was mostly a corporate market (roughly 75% of volume). Corporate buyers wanted a commodity. They were buying 500 or 5000 boxes, they wanted them all the same and they wanted to be able to order 500 or 5000 more roughly the same next year.

When consumers did purchase computers for home use in significant numbers they largely purchased the computers that they had been using at work: PCs. Cheap commodity PCs that came with MS-DOS and later Windows.

This dominance in the enterprise served Microsoft very well. Their operating systems and other software offerings (most notably Office) became huge money makers for them, propelling Bill Gates (the founder and CEO of Microsoft) to the top of the “world’s richest” list.

Does it matter who buys Windows?

The thing about the enterprise, as Ben Thompson has pointed out on more than one occasion and most notably in What Clayton Christensen Got Wrong is that within the enterprise the purchaser of the product (the PC or the OS for the PC) isn’t the end user of the purchased product. The concerns of the CIO when purchasing for the company are quite different from the concerns of consumer purchasing a computer that they are going to use themselves. In other words, compare the reasons a company purchases a fleet of vehicles, with the reasons a person purchases their own car:

A CIO, for example, must justify a software purchase, and said justification usually comes down to balancing lists of features versus prices. Whatever solution scores best, wins.

This, Thompson argues, and I fundamentally agree with, is different from the way in which a consumer purchases a product. If it wasn’t I assume we’d see very few sports cars being sold. Yes consumers behave somewhat rationally and look at price and features, but we also care about the colour of the car and the way it looks, things that have little to no baring on the way it performs. CIOs don’t care what colour your PC is.

Microsoft was never as relevant for consumers as they were in the enterprise. Yes consumers used Microsoft’s operating system but not really out of choice, Windows was the default operating system that came with your family PC or the operating system that you ran at work not much more. Very few consumers made a conscious choice to choose Windows. And yes Microsoft Office became the dominant “office productivity suite” (for lack of a better term) but this was, again, an enterprise driven decision and not a result of consumer choice. Office is a good suite of software but not something that most people need to use at home unless it is for work, this includes students whose job (school) often requires Office.

In the late 2000’s (2007 if you want a year) the computing landscape, and Microsoft’s position in said landscape, changed dramatically with the rise of the smartphone. I would argue that Microsoft didn’t so much miss mobile as many have argued (Windows Mobile, Windows CE, and Pocket PC all predate the iPhone) instead they failed to find success in mobile because it was consumers and not CIO’s that were purchasing the devices.

It wasn’t just who was purchasing smartphones it was how many smartphones were being purchased. Sales of smartphones surpassed sales of PCs in late 2011 and haven’t looked back. Consumers were, and are, purchasing smartphones (running iOS or Android) in numbers that dwarf the sales of PCs. For example in 2013 there were 317,648 PCs sold compared to 1,806,964 smartphones (source: Gartner) and virtually none of those smartphones were running Microsoft’s OS. This meant that Microsoft’s share, and I would argue relevance, declined rapidly. You can see this in the following graph from Benedict Evan’s aptly titled post: The Irrelevance of Microsoft, where you can see Micrsoft’s share of connected devices drop from a peak of 90% down to 20% in four years:

It wasn’t so much that sales of PCs slowed or declined (which they have) it was that sales of computing devices that were not PCs running Windows exploded:

Note: An argument can be made that the rise in the Internet also hurt the relevance of Microsoft earlier than the mobile revolution. This argument is succinctly made by Benedict Evans in the above mentioned post: The Irrelevance of Microsoft. I think you cal look at the failure of Silverlight and many of Microsoft’s web technologies as evidence for this.

A Case for a Less Relevant Microsoft

I think that Microsoft mistook market share for consumer desire.

In a nutshell this is what happened to Microsoft’s relevance:

In reality it was two things happening in tandem: the change in who was driving the majority of computing sales (moving from PCs to smartphones meant moving from enterprise to consumers) and the sheer volume of smartphones being sold resulted in a Microsoft that controlled a much smaller percentage of the computing landscape. The loss of control resulted in a loss of relevance. Now that consumer buying power controls what happens in computing, companies like Apple, Google, Facebook have overtaking Microsoft for relevance in the same way that Microsoft overtook IBM.

It is also worth noting that Microsoft is trying to reverse this trend through a variety of methods including decreasing the cost of Windows to OEMs for PCs, tablets, and smartphones (even giving it to them at zero cost in some cases); as well as releasing touch-first Office for iOS and Android before Windows. The latter being, as they said, is an attempt to go where the customers are. While many of these are smart moves that will help Microsoft (Azure looks to be a good business for them) it’s not clear that any of them will have any resonance with the consumer market.

It’s also possible for a company to make a very healthy profit by focusing only on the enterprise, and I’m not claiming that Microsoft is going away anytime soon. However one has to only look at the fortunes of IBM, HP, and Dell to see what a lack of relevance can do to a company. Remember this is the first time consumer buying power has directed computing, we are in uncharted waters here and it is not clear what it will do to enterprise focused companies.

Microsoft played a huge role in the computer revolution. They set out (according to the older mission statement) to “put a computer on every desk and in every home” and in the western world they largely succeeded. The downside to this was that they mistook that success for consumer acceptance as opposed to the result of the monopoly position their operating system had in the enterprise.

If you think about it, there is something interesting about that mission statement, it shows that Microsoft, even as it was dominating the enterprise, was looking to win over the hearts of consumers. And while they succeeded in putting a computer in every home, that computer now largely lies dormant while the family computes from the couch on their smartphones and tablets.

There were a few things I wanted to touch on in this post but couldn’t fit in: what happened to IBM, how much more personal smartphones are when compared to PCs, what happens to enterprise PCs at night (nothing), etcetera; maybe in another post.

Also I hope to explore the topic of Microsoft’s relevance a little more in some upcoming posts but in a more personal manner. I was around writing software for Windows for much of the 2000’s so I felt this change in a visceral way as the tools I worked with and created seemed to get less and less important each day. I think it’s an interesting story. 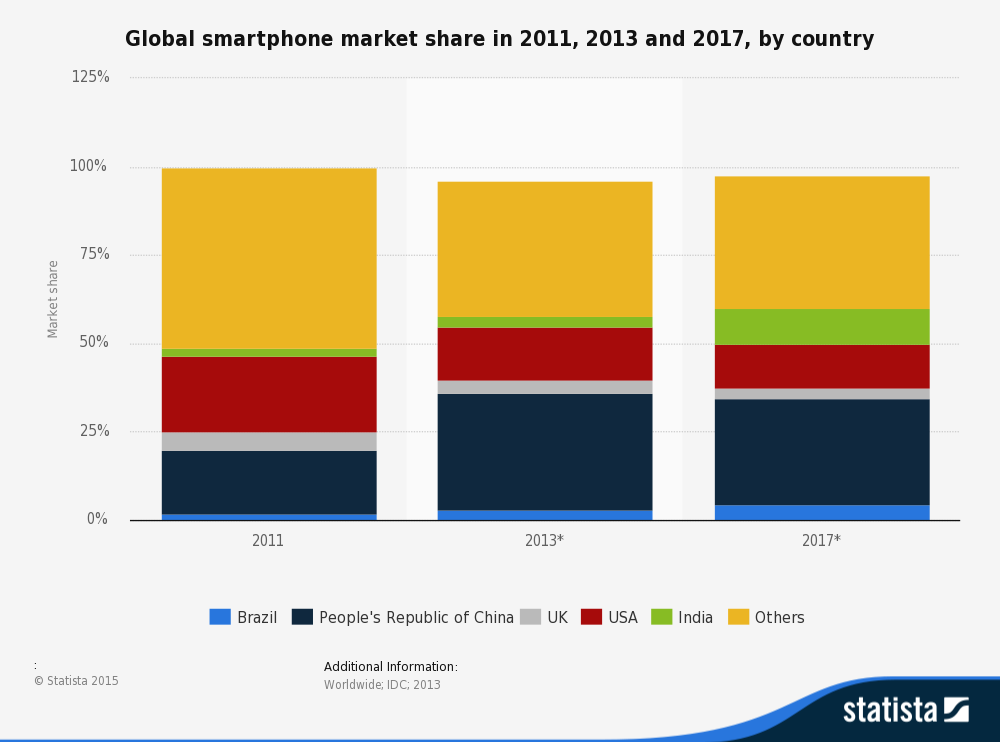 The Chinese Android app ecosystem differs from the Western app ecosystem in one very important way: Google Play does not dominate. In fact, there is no one dominant app store thanks to the Great Firewall of China blocking Google play. Instead of one app store what you have are literally hundreds of different app stores vying for consumers attentions.

As a developer you do not need to upload your app to every single app store, instead targeting the top ten or so stores will get you access to most Chinese Android handsets. If you are not fluent in Chinese getting into a Chinese App Store can be a little difficult. Over the next few weeks I want to look at how to sign-up for developer accounts at a few of the major Chinese app stores and how to release your apps into those app stores.

For now here is a list of the top ten app stores in China (well eleven) and links to their developer pages. The ranking data comes from NewZoo.com but I added AppChina in at the bottom along with TaoBao since Google Play really isn’t interesting for our purposes:

If you like graphs as much as I do here’s another smartphone sales graph you will find interesting: 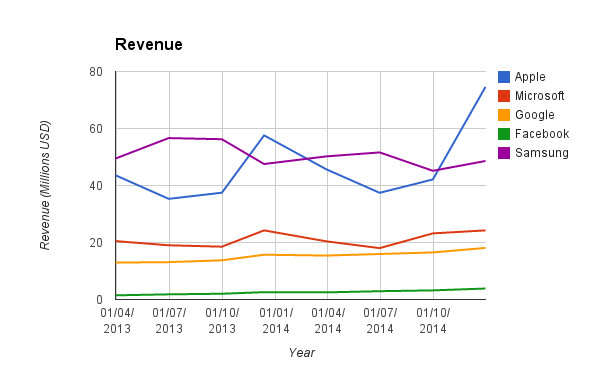